Benefits of DNA Testing in the Diagnostic Testing Cycle 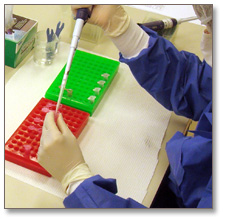 Strand uses DNA Specimen Provenance Assay (DSPA) to match the DNA profiles of a patient’s self-identified cheek swab to the cancerous biopsy tissue to rule out the possibility of specimen contamination (i.e. confirm sample purity) and confirm the tissue belongs exclusively to the patient being evaluated.

While DNA testing is most commonly performed in forensic laboratories for the purpose of crime scene analysis and/or parentage, numerous researchers have acknowledged the potential benefits of leveraging this proven technology in the healthcare setting.

• Similar conclusions were drawn during a study that examined biopsy misidentification in a large multicenter trial. Published in the Journal of Clinical Oncology, authors stated, “The potential for biopsy mismatches in clinical trials and clinical practice is an under-recognized problem that requires rigorous attention to details of chain of custody and consideration of more widespread DNA identity testing.”2

• The American Journal of Clinical Pathology documented the rate of occult SPC occurrence and demonstrated the utility of DNA-based testing to detect the errors not captured by current laboratory protocols. This study3 found that up to 3.5% of biopsy specimens being evaluated may not belong exclusively to the patient being diagnosed, whether by specimen contamination or patient misidentification errors. By incorporating DNA Specimen Provenance Assay testing into the standard process for collecting and evaluating biopsies, patient safety can be improved through the identification of otherwise undetected specimen provenance errors that can lead to unnecessary medical interventions and/or delayed treatment.

• As published by The Journal of Urology the social and economic burden of healthcare expenditures associated with this SPC error rate data exceeded $8804 million annually and further concluded that 1 in 200 prostate biopsy patients are affected by specimen contamination or patient misidentification errors.

• Clinically significant admixtures5 (specimens with greater than 5% DNA contamination of another source) were recognized by the authors of a Washington University study as published in the American Journal of Clinical Pathology. The findings determined that 2% of the next-generation sequencing samples evaluated were so significantly contaminated by another’s DNA that the biomarker test results were confounded.

DNA Specimen Provenance Assay (DSPA), DNA testing, as part of the know error® system is increasingly becoming the standard of care to complete the diagnostic testing cycle for cancer, providing patients and physicians with a complete diagnosis to proceed with the personalized therapy for the appropriate patient.

DNA is extracted from the tissue/buccal swab by lysing the cells. The amount of DNA that is present is typically quantified; depending on the amount of DNA available, the sample may be concentrated or diluted to optimize the amplification reaction. Formalin fixed, paraffin embedded tissues are not an optimal source for DNA, as the fixation process is known to both degrade DNA and to cause chemical crosslinking that can impede downstream tests. We use specialized reagents and techniques specifically designed to work with this difficult sample type.

Very specific locations (loci) in the DNA are copied (amplified) millions of times; each copy has a fluorescent tag attached. This amplification process is very sensitive. If non-patient DNA is present, for example, from extraneous tissue in the water bath or from a cutting station that is not cleaned between samples, the non-patient DNA will be amplified along with the patient DNA, and readily discernable in our test result—even if the foreign cells are not distinguishable under microspic examination.

Capillary electrophoresis separates the DNA based on fragment size and charge. The fluorescent tag on each fragment is excited by a laser and the emission is captured by an optical detection system. The combination of fragment size and fluorescent tag allows the assignment of DNA fragments to specific alleles for the 16 individual loci that were tested. Even if useful data is only obtained on a faction of the loci examined, assignment of provenance is generally possible.

The DNA profile from each tissue sample is compared to the DNA profile from the corresponding reference sample of known provenance. The comparison includes identifying the loci having data that are acceptable for comparison, identifying the alleles at each locus and calculating the random match probability of the profile. The random match probability is a statistical calculation of the likelihood that the same profile will be observed in another individual chosen from the population at random (i.e. how specific is the identification). The results of each comparison can be categorized most simply as Match, Non-match or Inconclusive (QNS).

• MATCH– There are at least 5 loci that are identical between the reference and the tissue, no conflicting loci observed and a random match probability indicating that the profile statistically can be expected only once in a population of at least one hundred thousand people.

• INCONCLUSIVE– The data obtained from the tissue, the reference or both is of insufficient quantity or quality such that a meaningful comparison cannot be made.

In the case of non-match or inconclusive results, the treating physician and/or pathologist must consider whether assignment of provenance for that specimen is necessary to render a complete and accurate diagnosis or treatment plan. If so, we recommend that the pathology lab re-submit a new confirmatory tissue scroll from the same paraffin block for which provenance is unverified for repeat DSPA testing, and re-read a newly prepared microscopy slide from the same block in order to confirm the original pathology interpretation. Conversely, if the provenance of the particular tissue can be disregarded without impacting diagnosis or treatment, then repeat testing may not be necessary (for example, if the provenance of five high grade cancer specimens has been confirmed via DSPA, but a 6th specimen yields an inconclusive DSPA result).